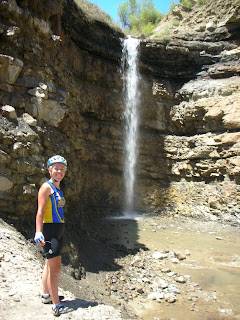 Today was one of the most difficult days I have had yet. I woke up exhausted from not sleeping much - I have been waking up really early (between 3:30 and 4:30 every morning) and some mornings I feel great until my afternoon nap but today was not one of those days. I was exhausted as I rode on my bike and the thought of riding in the sag wagen to the hotel was VERY enticing. But I kept on riding and focused on putting one foot in front of the other and breathing in and out. We had a bit of climbing today up to Soldier's Summit and a strong headwind in the morning and another, not as strong, headwind for the last 10 or so miles. So, they day felt long and I kept on peddling on. It helped to know I could drop into a bed when I got to the hotel. It is helped that the scenary was so beautiful. We went through canyons of white, pink, and of gorgeous formations (and found this waterfall coming off the canyon). I focused on being thankful for the be 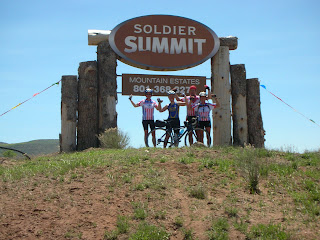 auty. And then... I got to the hotel and my room wasn't ready and the tears just poured down my face... I worked so hard to get there and the idea that I couldn't just lay down and go to sleep... there was no holding back the tears. The women saw my exhaustion and my stress and found me a room that was ready. I was very grateful. I jumped in the shower to get clean and was in the bed within 5 minutes. I had a nice 1 hour nap and am looking forward to a full nights sleep tonight.

So, enough about the hard day - I also had some good times. We stopped by the Hilltop Country Service, which is a store in the middle of nowhere but the town does have a name of Colton, Utah. The man who owns the store was very nice and has been retired since 1986 but keeps the store running to keep him active during retirement. He is considered the only resident now of Colton and the town mayor (there use to be over 200 people or families who lived in the town. He showed us old photos of the town people and how the town use to look. It was nice to hear his stories. He seems like a neat man - he has survived cancer and I am sure he has many many other stories to tell us; it was nice to have a soda and hear the stories he shared.
Posted by Audrey Leonard at 4:30 PM

Yay Audrey! Good job for staying with it when it was hard. You are such an amazing woman. I hope that you get a good night's rest!
Becky

Thought I left a comment, but I don't see it here. Can't remember what I said. What's more important, enjoying the overall experience of crossing the country or proving that you can do every single mile without riding on the SAF wagon? Have fun and don't knock yourself out. You go, girl!

Hey Audrey! Good Job finishing today! You are amazing! Don't push yourself too hard though, that is the mother hen talking in me. Take care and love you lots!
Sarah 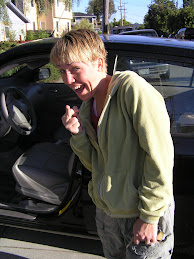